After the closure of the call for applications on 24 April, the EPSA Team at EIPA is pleased to announce yet another successful edition with 230 projects received from 26 European countries and EU institutions under the overarching theme "Weathering the Storm: Creative Solutions in a Time of Crisis". Together with the cases submitted to the EPSA 2009 and 2011 editions, this represents over 800 cases that will be available in the EPSA eKnowledge Platform to be released by the end of the year.

As a novelty of this 2013 edition, public administrations could submit their projects under three different administrative categories (European/National, Regional and Supra-local and Local). Nearly half of all entries were in the category Supra-local and Local, followed by European/National and Regional. The top submitters were Spain, Poland, Italy, Portugal and Romania respectively. 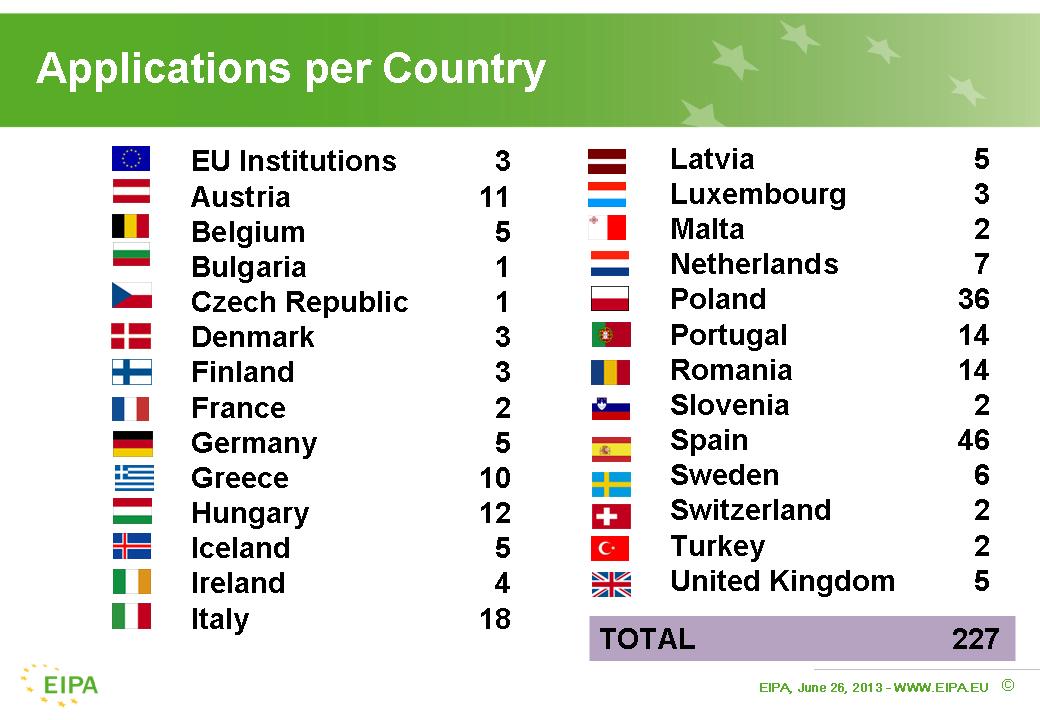 The prize winners and nominees will be presented during a three-day high-level final event and award ceremony in Maastricht (NL) from 25 until 27 November 2013 and all submitters are most welcome to attend this event.


What is the European Public Sector Award (EPSA)?

The EPSA brings together the best, most innovative and efficient performers from the European public sector. Outstanding administrative performances are, after all, produced under different conditions within Europe. more information...

Connect with us in:

With the Support of:

Find out more News or Events

This book aims to demonstrate that various creative and smart routes to excellent solutions are possible, by analysing success stories in different areas of local public management from seven European cities in the EPSA scheme – Bilbao (ES), Birmingham (UK), Mannheim (DE), Milan (IT), Tallinn (EE), Tampere (FI), and Trondheim (NO). It concludes by presenting seven steps leading to excellence. The only thing left to find out is: are other cities ready to take on the challenge?

What kind of ideas are behind the remodelling of the state and public sector, and how have these ideas materialized in practice? In this book the authors illustrate what are the driving forces behind the huge amount of public management reforms over the last three decades. Trends and ideas of public management reforms in practice are validated by data from European Public Sector Award cases (2009 and 2011).

Public Management in the 21st Century

The EPSA brings together the best, most innovative and efficient performers from the European public sector. Outstanding administrative performances are, after all, produced under different conditions within Europe.